This is a talk I gave to the ‘Back to the Future? What Next for Voluntary Action and the Welfare State’ Conference in July 2019. Thanks very much to the Discourses of Voluntary Action team – Georgina Brewis, Angela Ellis-Paine, Rose Lindsay, Irene Hardill and Rob Macmillan – for inviting me.

My work is trying to tell the story of the local voluntary sector. There is a lot of really valuable work looking at national-level policy and practice changes over time, and I’m really excited that things like the Discourses of Voluntary Action project are bringing nuance and extending our understanding of this history. But we talk about the majority of the sector being small and local, so that story needs to be told too. We need to make sure that we include experiences of those who are less dominant or privileged alongside, including community-led organisations and more radical groups. So that is what I’m trying to contribute. I’m doing this by using the records of the Barrow Cadbury Trust to explore the history of the sector, or a part of it, in Birmingham, from 1965 – 2010.

This is still very much a work in progress, so today I would just like to share one idea with you that I’ve found interesting as I explore this topic in more detail. Part of what I’m looking at is what it means to be a voluntary organisation, and part of a voluntary sector – or even, whether such a thing really exists. We’re probably all here today because we think it does, but different organisations engage with it in different ways, and to different extents. There are different values that we attach to it, and we construct and enact these in different ways too, as I will try to explain.

I want to start by framing it up with this tweet, from April this year (2019).

This isn’t a critique of the tweet itself at all, but it intrigued me on a number of levels. ‘Somehow, we have allowed ourselves to become “service providers” – well, how did that happen? Who’s included in the ‘we’? Were organisations aware of it? Did they think it was a good thing or a bad thing? Were they complicit or did they resist? And did we really stop being a movement for social change? How far do we need to go back, if indeed we do?

There are a lot of concepts and values at play here that you can choose to focus on, but for me this is all tied up in the idea of ‘independence’. Because if the sector has somehow changed, then there must be some actors driving that change, and there are potential implications for independence bound up with that. With other types of change it might be the voluntary sector acting independently but I’m going to assume a little bit of policy knowledge in the room and suggest that the state has had at least a part in directing this particular move, perhaps in partnership with voluntary organisations.

Independence is an idea that preoccupies the voluntary sector, policy makers, and those of us who research it quite a bit. It is not a fixed, singular or static idea, however. From looking across policy documents from both government and the sector, you can draw out interlinked narratives of independence of funding, of action and of change. These are deployed in strategic ways at different times, underpinned by dominant or challenging political ideologies. They can also be traded off against one another, or made contingent or conditional on certain factors. 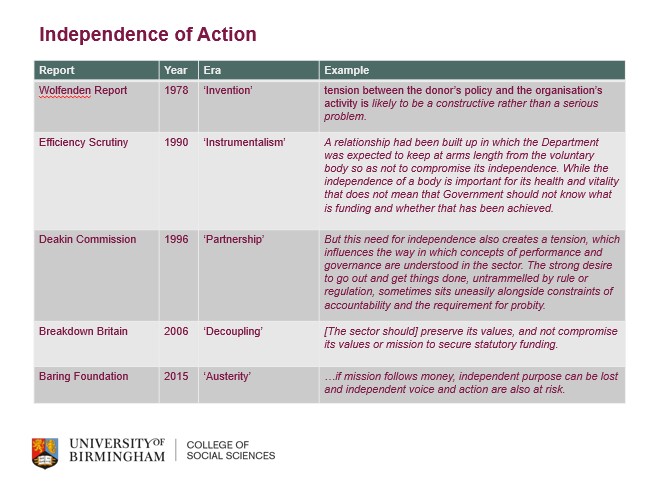 These are some examples of how policy documents talk about independence of action, which I think is most relevant to this tweet, although as you can see it can be difficult to separate this from independence of funding. In 1978 this isn’t much of a concern – if an organisation chooses to receive money then it may also receive some helpful suggestions about its organisation. By the 1990s government is more concerned that it lacks oversight over how public money is being spent, and whether it is spent in ways that meet government needs. It wants to change this relationship to make sure it is in charge. Just preceding the New Labour government and an era of partnership, the Deakin Commission recognises a tension between action and oversight, monitoring, and demonstrating cost effectiveness, legitimising these perceived needs as trade-offs for the sake of partnership (and, I think, its vision of doing better). Then the final two papers, from conservative think tank Centre for Social Justice and from the Baring Foundation are, and I’m sorry if I offend anyone in the room here, saying more or less the same thing, but with a drastically different ideological underpinning. Breakdown Britain calls for small government with freedom for organisations to provide without red tape and regulations (or funding), while the Baring Foundation wants a more equal partnership.

The material I’m using is correspondence between the Barrow Cadbury Trust and the organisations it funds or has other relationships with. This includes letters, meeting minutes, monitoring reports and other material that the organisations share. I’ve not had much time with my data, but what is starting to emerge is a sense of the messiness of how organisations and the field as a whole develops, as the social and political environment around them changes, how different types of organisations react and interact in different ways, the precarity of some organisations and the resilience of them, and also the ways organisations construct their own identity and that of the sector. Independence, of course, features. The way it features is dependent on the context, but also rooted in and filtered through other concepts of race, resources and power too.

The Afro-Caribbean Self Help Organisation, for instance, despite being majority funded by the Trust in its early years, is fiercely independent in terms of action. It refuses to produce regular reports for the Trust, to supply them with accounts or to let them know what other work is being funded from other sources. This unwillingness costs them funding from other sources, but they do not alter their approach. It is informed by their ideological principles, their consistent anti-racist struggle within white governed spaces, and a historical cultural tradition of self help, education and entrepreneurship. The quote here is a nice counterpoint to the Wolfenden Committee’s assertion that funder involvement will be welcome. 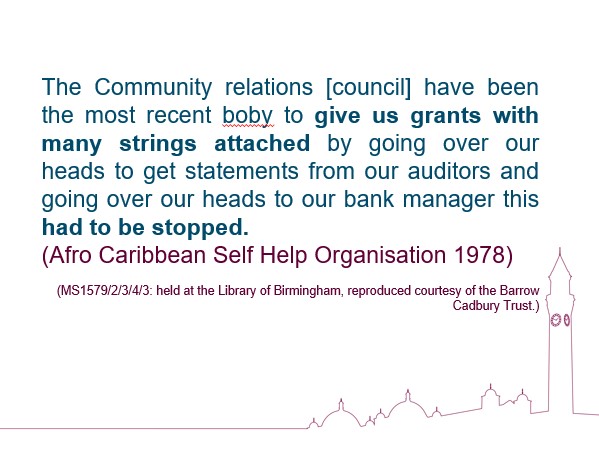 The St Joseph and St Saviour’s Youth and Community Association, also a Black-led organisation, speaks to that idea of trading off independence of action for funding, and hopes to move out of that relationship. It invokes issues of power within funder-grantee relationships, and seeks to rebalance this and re-take ownership of its own work. Later on this organisation talks about the difficulty securing funding, given both local cuts and local priorities that don’t match the Association’s work, and into which it is not willing to neatly fit.

The Birmingham Women’s Advice and Information Centre engages to a much larger degree with the bureaucracy and structures of the state and internal organisation. This is after two decades of public service reform and new public management theory that created markets of provision open to private and voluntary sector bidders. This isn’t a critique of its choices at all, to be clear, rather an exploration of its identity in the context of this policy environment. It constructs that identity as small, grass roots, and thus with an inherent connection to the community it serves. It critiques, to some extent, things like professionalisation of the voluntary sector, and the introduction of advice kitemarks, which pose organisational threats in terms of the cost of compliance, but it also drives behaviour for this organisation, affecting its independence of action. It represents quite a different model of organisation to other grass roots community led organisations that one might encounter, because it does engage in some of these bureaucratic structures; this is a tension it seems to struggle with itself. 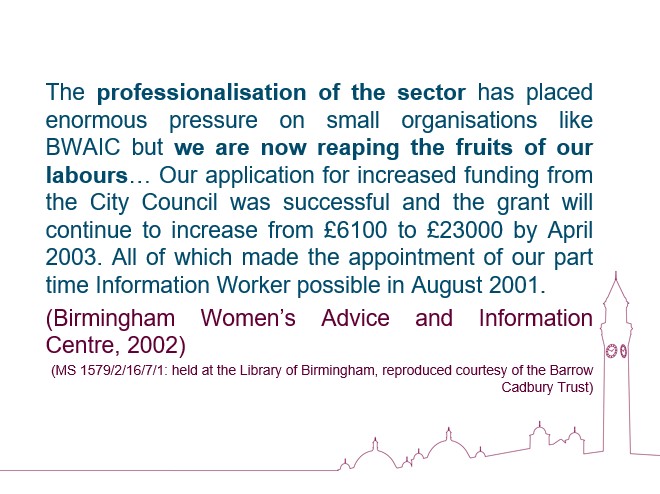 I’ve pulled out these examples as I think they present ideas and struggles with independence that reflect their time, whether maintaining separation in the earlier years, resisting instrumentalism and paternalism in the 1980s, or managing tensions between the bureaucracy of partnership and independence in the 2000s. So what can I say about the future for voluntary action?

Well, I suspect it’s likely to be just as messy as the picture I’m getting from the archives, and probably just as difficult to navigate. I think what this material can show us is that there isn’t just one historical experience for voluntary organisations, and that there is constant contention between and within organisations. When we talk about values like ‘independence’, I think it is important for us to interrogate exactly what we mean by that – independence of what, from what and for what reason? – what kinds of ideologies or politics are underpinning that, and what are the practical implications for funding, action and voice. We need to think about the longer term project too: what do we want our society to look like, what role do we want for civil society, and what values do we need to hold onto to achieve that?

One thought on “Narratives of independence: the national and the local”